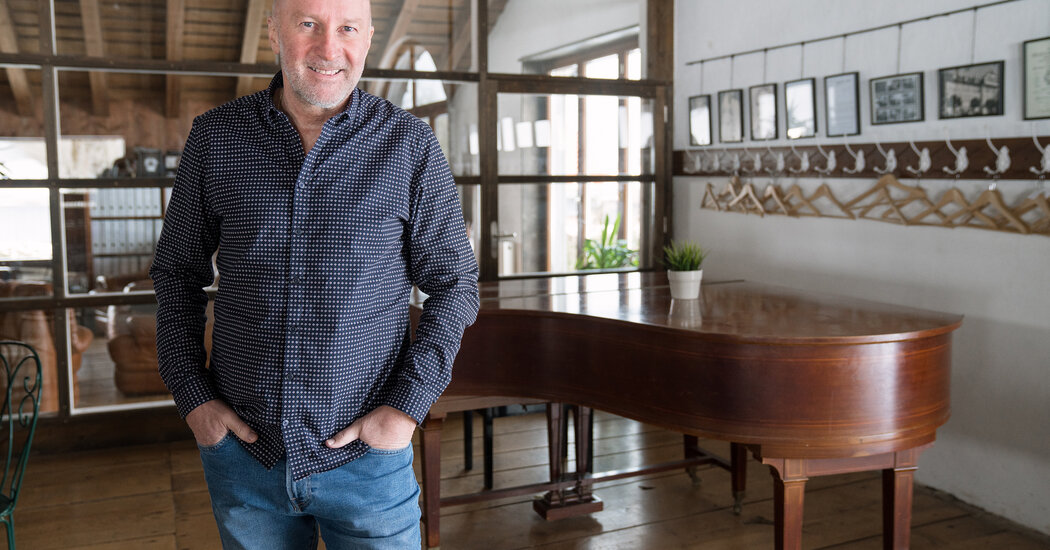 Jacky Epitaux, chief executive and president of Rudis Sylva, was relieved. After waiting two years for the physical Watches & Wonders fair to return, he was making final plans to show his high complication watches in Geneva this week.

The goal? “To increase awareness” of the small independent brand, he said during a recent video interview from his farmhouse in Les Bois, Switzerland, not far from La Chaux-de-Fonds, the Swiss watchmaking capital. Rudis Sylva was founded there, in his home office, in 2006.

Even Mr. Epitaux, 60, said he only wears one of the brand’s watches “when I have a specific meeting.” (During the interview, he had a Pierre DeRoche TNT Retro 43 Clyde, now worth about 22,000 Swiss francs, on his wrist.)

But, about the fair: Models from the brand’s 2018 collection, RS16, are to be presented, such as the 44-millimeter black titanium variation (200,000 Swiss francs), which has an open skeleton movement at 6 o’clock and a dial with red numbers at 12 o’clock. It also has exposed barrel springs at the back “because it’s nice to see how we wind it up,” Mr. Epitaux said.

There also is to be a 44-millimeter 18-karat rose gold RS12 Grand Art Horloger (250,000 Swiss francs), which has a black guilloché dial at 12 o’clock. (An 18-karat gray-gold version competed in the Grand Complication category at the 2013 Grand Prix d’Horlogerie de Genève, but lost to A. Lange & Söhne’s 1815 Rattrapante Perpetual Calendar.)

And for variety, Mr. Epitaux said he planned to show a brass prototype of a square watch, 43.5 millimeters wide by 14.5 millimeters high, with a dial similar to the RS12 and exposed movement, “to have another shape from the round,” he said in a later telephone call. The square timepiece, planned for sale later this year, is to be available in 18-karat white or rose gold for 250,000 Swiss francs.

All Rudis Sylva watches have the same movement: the Harmonious Oscillator, created for the brand in 2009 by Mika Rissanen, which has two interlocking balance wheels that regulate each other to eliminate the effects of gravity and increase accuracy. It is “at a good level of haute horology,” said Laurent Picciotto, founder of the Parisian watch boutique Chronopassion, which had stocked Rudis Sylva timepieces from 2012 to 2015.

The movement took five years to create. “The first time we got the movement on the computer, everything was functioning so we started to engineer all the components,” Mr. Epitaux said. But, “after you assemble the components and after you check the accuracy, you see there are wrong things.” He estimated that half of the original 300 components had to be thrown away.

A lot of Rudis Sylva’s media coverage over the years has emphasized Mr. Epitaux’s background in soccer. From the 1980s into the mid-2000s, he played, managed and later became president of the Swiss soccer club FC Le Locle Sports. But he was doing that while working in sales and marketing roles for Zenith and the R&R Time Group and, by 2001, had become chief executive of Rodolphe Montres & Bijoux.

Mr. Epitaux formed the Rudis Sylva brand with a cousin, Laurent Frésard, owner of the investment company Longitude (Cayman) Ltd., and a friend, Fabrice Thueler, director of the manufacturing company Swiss Finest S.A. He invested the money that he had gained from the 2005 sale of Montres to Franck Muller because, he said, “I wanted to do my own project.”

The brand’s name is tied to the history of his village: Rudis from the Latin version of Jean Ruedin, the village founder’s name, and Sylva, from the Latin for forest. Three pine trees above three mountains feature on the village’s flag and the brand uses that logo, above the initials R.S., on the winder crowns of its watches. The watch hands also have a stylized pine tree shape.

Rudis Sylva has another tie to the village, too: In 2012 Mr. Epitaux founded a five-bedroom hotel, Le Paysan Horloger, which has a restaurant and a small watch museum that includes a guilloché, or engraving, machine from 1770. After all, “you need that for your customers” when they are coming from abroad to discuss watches, Mr. Epitaux said. (Although domestic visitors were the predominant reason the hotel increased its occupancy to a total of 1,500 guests last year, he said.)

The company’s website and its retailers, like Elegant Watch and Jewellery in Hong Kong, now offer the brand’s six collections, from RS05 to RS16. (It can take six months to two years to make each watch, with its in-house movement, Mr. Epitaux said.) And the company takes on lucrative special orders for bespoke commissions like the 18-karat rose gold 52-millimeter pocket watch it made in 2016 for the Sultan of Oman, which included an enameled white gold dial engraved with the sultan’s portrait.

Components actually are sourced locally — within about a 20-kilometer (12-mile) radius, because “everybody is around” the area, Mr. Epitaux said. And, living in a village full of watchmaking talent, he outsources tasks to a network of 30 local artisans and some contractors, such as Sophie Cattin Morales for enameling and Georges Brodbeck for the guilloché work. Sébastien Jeanneret, who previously played soccer for several Swiss teams as well as the national team, assembles pieces.

This diffuse organization helped the company survive during the pandemic, Mr. Epitaux said, as “we didn’t have 200 salaries at the end of the month with big rentals in factories.”

Now, with pandemic restrictions lifting in many locations, opportunities may be opening for Rudis Sylva. Wealthy people have accumulated cash in the last couple of years and now that waiting lists for top brands like Patek Philippe stretch for two to three years, customers “start to look around if there is something else,” said Mr. Picciotto of Chronopassion.

Yet according to the watch industry consultant Reginald Brack, the challenges for a brand that produces so few watches each year has to be maintaining its relevance — and, he said, “getting your product in the right consumers’ hands.”

Mr. Epitaux’s immediate task is to regulate production: keeping the brand small, but, as he said, “to have a rolling production to feed our suppliers regularly and to produce regular watches. Not to have this, like we had in the Covid situation, to produce one day and next day nothing.”

A new watch design is being developed too, and while Mr. Epitaux would not share many details, he said the pine tree-shaped hands were being moved so “we have to place the components differently.”

That watch won’t be making its debut at Watches & Wonders this week, he said. But there’s always 2023.